On March 5th 2019, the winners of the 18th European Office Products Awards (EOPA) were announced at a special presentation dinner in Amsterdam.

The winner of ‘Video of the Year’ was our video project with Brother International Europe, showcasing the VC-500W full-colour compact label printer with ZINK Zero Ink Technology.

This commercial shows the power of Brother’s printing technology, a concept that was formed and then brought to life by GROUNDBREAK with stunning results. Click on the thumbnail to view the video below: 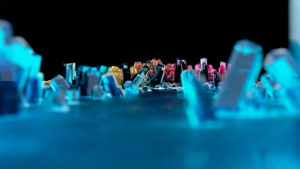 The judges of the awards ceremony commented,

“As video content becomes increasingly vital, companies that produce interesting, creative and informative videos to showcase their products, services or company while engaging the customer are reaping the rewards. Judges will be looking at how the video captures the viewers’ attention, brings the subject to life and conveys a message.”

This commercial was also nominated for the Best Content Creation category, at last year’s MPA Inspiration Awards in Manchester so now it’s great to have an ‘award-winning video’ title to add to that!

Would your business benefit from high-quality video content? Have a look at our video showreel and portfolios of commercials, visual effects (VFX), animations, and corporate videos. If you have any questions regarding video production, contact us and we’ll get back to you!

In a previous blog, Geoff described how added production values mean that you end up with a much better film. Everyone can point a camera and press record, but there’s a lot of additional effort and skill required to produce professional, high-quality video.

We pride ourselves on using the best equipment, crew, and processes for every film project. In this blog we’ll be looking in a bit more detail at one of the important steps of video production – colour grading. 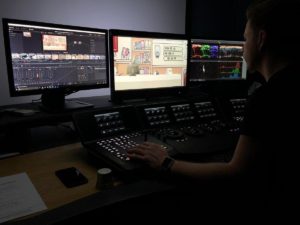 What is Colour Grading in Video Production?

Simply put, colour grading is the process of improving the appearance of an image. Wikipedia adds, “Various attributes of an image such as contrast, colour, saturation, detail, black level, and white point may be enhanced whether for motion pictures, videos, or still images.”

Colour grading can also include artistic effects like creative blending. After a film has been graded, it will appear more vibrant and almost ‘pop’ out from the screen. Colour grading is creating a mood or tone through colour or stylising an edit. When you grade an edit you are telling a story and instigating a mood. For instance, a warm orange tone generally promotes happiness or nostalgia. Blues create a darker mood and Greens you’d often find in horror or thrillers. Next time you watch a film try to take note of the colour schemes and the ‘feel’ of the scene.

It doesn’t matter how good your camera equipment is, the final footage won’t look as polished as a Hollywood movie without adding some colour grading. If you have a spare two minutes, take a look at this footage, with and without colour grading.

Have a look at our video showreel and portfolios of commercials, visual effects (VFX), animations, and corporate videos to see what the finished product should look like. If you have any questions regarding video production, tweet to us at @GroundbreakUK and we’ll get back to you!